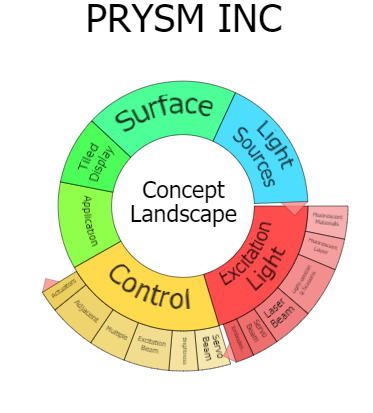 Techniques and optically excited light-emitting devices based on phosphors are provided to
use phosphor materials which absorb excitation light to emit visible light and
include a composite phosphor material including two or more different
transition metal compounds that, under optical excitation of the excitation
light, emit visible light at spectrally close but different spectral
wavelengths or bands that spectrally overlap to produce a desired color.

A scanning beam display system based on phosphor materials, comprising:

an excitation light source to produce one or more excitation beams of the same
wavelength having optical pulses that carry image information;

causing application of the obfuscation level to the asset in said at least one of the different meeting rooms sharing the asset based on said individual meeting participants’ state.

A method of displaying an image on an electronic display system, comprising:

receiving frames of image data to be displayed, wherein the image data includes an optical output intensity of each pixel and subpixel of a display device of the display system to produce the image or frame and the sub-pixels are red, green, and blue subpixels;

wherein the electronic display system includes multiple display devices and each display device displays a portion of the image data.

Michael is interested in how companies value there IP. These reports are focused primarily on the the value IP brings to Companies after filing for bankruptcy.